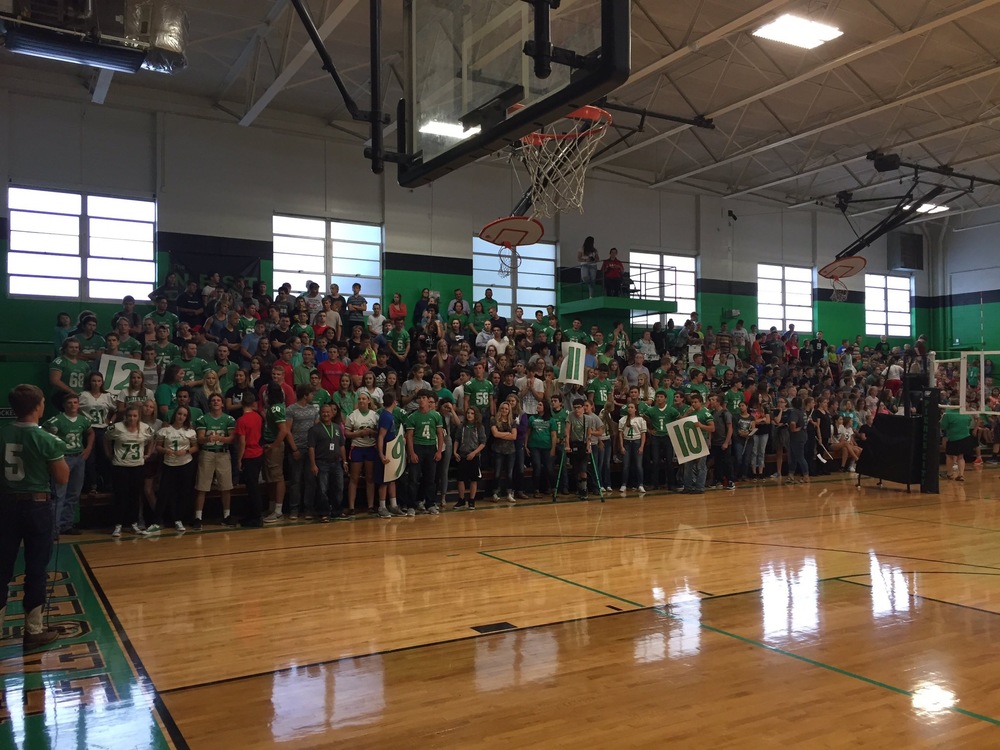 On Friday August 18th, Pierce City had its first pep assembly for the 2017-2018 school year. The assembly took place during 7th hour. This is an opportunity for the entire school to come together to show school spirit as well as recognize the athletes participating in the current sports season.  We started out the assembly with the playing of our National Anthem by Jessica Spencer. Jessica has had the opportunity to play in the National FFA Band for her second year in a row.

After Jessica finished playing, the Advanced Band students played our school song while the cheerleaders showcased their routine. After completing their routine, Ms. Hammond, the cheer coach, introduced the cheerleaders. It was then time to meet some of our other players from the other teams.

The football team was asked to come forward and Coach Hocker talked about their expectations for the season. He told the students what their schedule looked like and encouraged the student body to come out and support the boys.

Next, Ms. Hill came up and shared how the jamboree went on Thursday night and told the students what she expected for the season. She then shared the volleyball schedule, emphasizing the first home game and explained that the girls would love to have their support!

This year we have started a competition to get students involved called the Spirit Contest. In this contest, students participate to earn points for each grade when the most spirit is shown.  The grade that has the most points will be awarded a prize. The way points can be earned is by attending games, participating in dress up days that the different organizations have, sharing photos on social media and by exuding school spirit by cheering the loudest they can.

Remind your students that if they are at a game to take a picture with the score board or something that shows school spirit and use the following hashtags: